It definitely was an experience running this event, especially during the rain. We were soaked to the bone after the storm but completed the race!

We came by this race by chance, as I was looking for some events in Malaysia and the Love Run 4.0 fell exactly when we were travelling in Kuala Lumpur.

The event was put on by the Muk En Foundation in Kuala Lumpur. The annual event is used to raise funds for social care work and operations for the Foundation to help poor and urgent families and vulnerable groups. It also uses the event to encourage families to participate in physical activities and exercise. 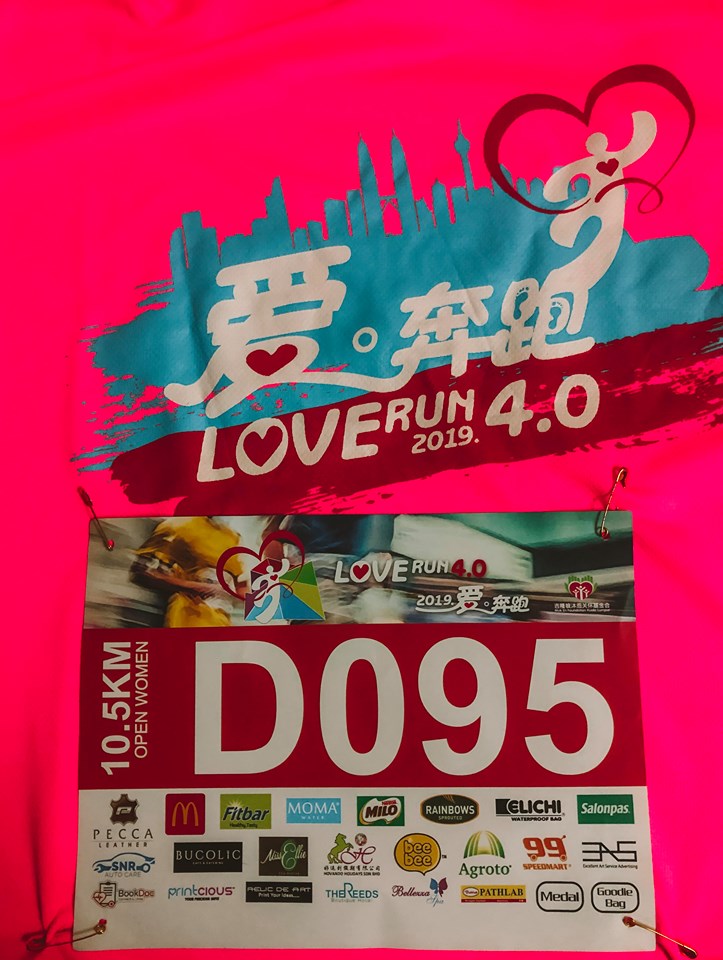 One day I’ll be able to put a race bib on straight!

I couldn’t find a single event that was still open for us to enter, but I popped an email to the event organiser and within a few days, she replied all the details. It was a week before the event and we were able to run it, she even let us pay the day before the event and pick up our race packs in person as we obviously didn’t have an address in KL. We had to go to the church which was really easy to find and met Olivia the main contact for the organisation.

We were given a technical t-shirt and number in advance, I was so impressed with the level of the pack for the price we paid. She also showed us that the medals all line up, they’re puzzle pieces so each year you get a different letter that links to the previous years medal.

The route was a circular loop of the Kepong Metropolitan Park in the north side of Kuala Lumpur. The running path surrounds a lake that is often used for fishing. On the rainy morning, it had a beautiful mist over the water as the green trees reflected on the surface.

The route was as flat as it could be, there were a few slight ups and downs on the right hand side of the lake, but the rest followed a pretty flat route. It could be a little slippy in places due to the rain, but other than that, it was a full paved route.

We arrived at the park at 06:20 in the morning, it was a dark dreary sky when we arrived and our taxi driver dropped us off at the other end of the park. We were fortunate enough that the event put on a shuttle bus and just as we got on the bus, the heavens opened. Torrential rain, the paths were flooding, the lightning and thunder were rocking the ground and all of the runners were huddled under the many tents at the race village. 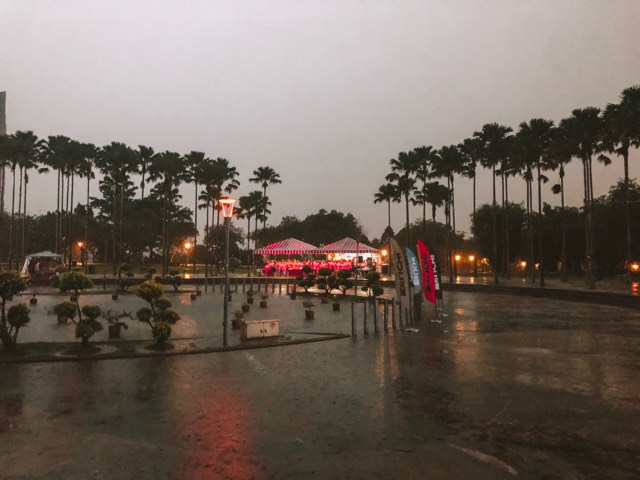 Flooded and rainy race village. Runners were huddling underneath the tents.

The event was meant to start at 07:30am, but unfortunately due to the weather, we eventually set off about 08:35. We were very lucky as they were making the announcements in Chinese and English, so we weren’t left out of the loop. We bumped into Olivia as well so she updated us on everything that was going on – she kept apologising as well, I mean, there is nothing you can do, it’s the rainy season!

They started the 10.5km off first followed by the 3.5km. They gathered us all together for the start of the run and set us off with the horn, unfortunately due to the weather, not as many people turned up, so this was a smaller group of runners for the 10.5km.

We set off around the loop, the fast runners sped off whilst us steadier runners made our way around the run. The first lap was pretty quiet, with the rain still pouring down. We came up to the drinks station and they gave us a rubber band for each lap we have done. We then had a choice of water or energy drink – note in this race, they never ran out of drinks, there was always enough for all of the runners (check out this race here as to why I noted that).

During this first lap, they had sent the runners for the 3.5km off so towards the end of the second lap, we started catching up with them. It got busy just before the finish of the second lap as the runners/walkers were coming in to the home straight. A lot of the 10.5km runners were having to weave in and out of the runners.

The route was marked well especially with the finish/section to continue running for the 10.5km runners, so it was easy to pass the finish and keep going.

The final lap was coming to an end and the sun had started to shine through the clouds. The rain let up and the ground was starting to dry, it was good to finally enjoy the run and really see the lake for what it had to offer. It was a beautiful view and such a nice way to finish the race.

After crossing the finish line, the race village was still buzzing as there were runners lining up to get their medals and finishers packs. They were doing the raffle, unfortunately we didn’t win and couldn’t stay any longer to see if we won anything – the prizes were suitcases, dry bags, buffs and so much more.

I was worried when we started because there wasn’t a lot of runners for the 10.5km. I saw the rest of the runners and thought I was going to be the last one to finish as they all looked fast!

We set off in the rain and managed my first loop at a decent pace. I took breaks whenever I came to the drinks section, just because it’s hard to drink water when you are running. My first loop I also had to make a few stops as the rain had made my running number fall apart, I had to keep pinning it back on. Towards the end of the second lap, I just took it off and put it in my belt as there was no hope of it staying on.

I was enjoying myself during the run, I felt fine with the pace, small hills and weather. It was still hot even though it was raining so I didn’t want to overheat. I just took my time really, at one stage stopping to take a video of the beautiful view on the lake when the rain had stopped.

I found that the other male runners didn’t seem to like me overtaking them. Whenever I would come up near them or overtake, they would try and sprint off so that I couldn’t catch them, and then end up walking. It bothered me, I don’t know if it is a pride thing but they certainly didn’t like me overtaking them during this race.

I carried on running and enjoying it at my own pace – also didn’t cross over the finish line last! 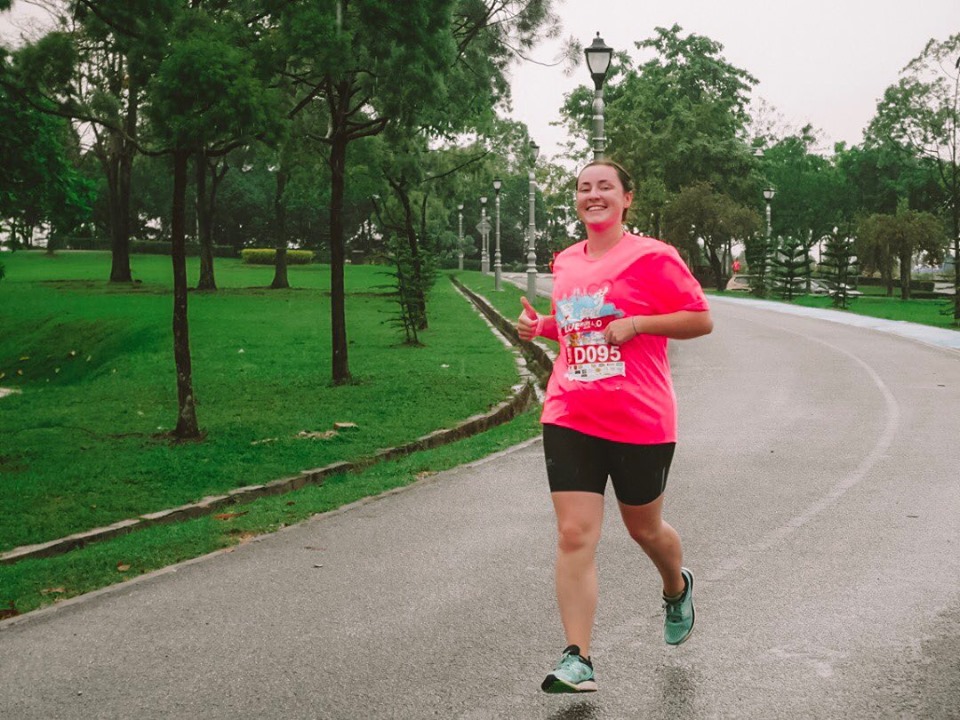 Several photographers were dotted around the course and were able to capture some epic flying feet shots.

My only negative comment I would have would be about the finish. I came into the finish and there was absolutely no one there. It just felt a little underwhelming and a bit sad that the only people at the finish were just the 3.5km runners who were actually all stood in the way of the main finish. I just would have thought there would have been more people/volunteers at the finish cheering people for that last section, I finished the run and kind of thought “oh, is that it?”.

This improved though as we had to head to a separate section to get our medal and goody bags with friendly marshals.

I was glad I finished the race, it was a good race, we definitely had fun doing it. It wasn’t a PB for me, because I’ve given up on PB’s whilst I am travelling, it’s too hot and I’ve lost some of my fitness, but I am okay with that. My focus is to just enjoy the races and make the most out of the time I have running them. 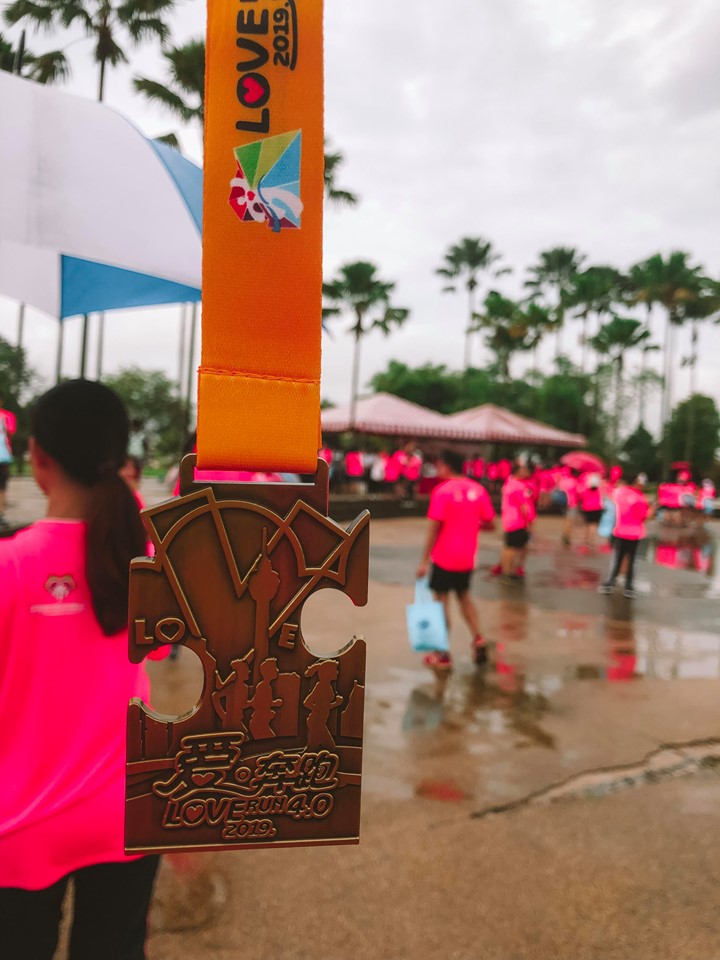 Love Run 4.0 medal. Shaped in a puzzle piece so each year it all links together. There is one more year to go.

I really enjoyed this run, it’s a shame it was laps because sometimes they get tedious, but they were short laps and you knew it was going to come to an end on the third lap.

I think I just enjoyed the whole atmosphere put on my the organisers, the marshals and race village. Everyone was cheerful and happy even with the weather. The runners could have been better but other than that we had a good time. It was also the first time we’ve ever been given cucumbers in a race pack, which was certainly interesting but definitely tasty!

Just a shout out to Mitch who came 4th overall, if only he’d got third, we would have had a big trophy to carry around South East Asia!

I would recommend to anyone in Kuala Lumpur during June to consider running the Love Run. It’s for a good cause, put on very well and just is a pretty route. We would definitely do it if we lived there to try and get the full set of medals! 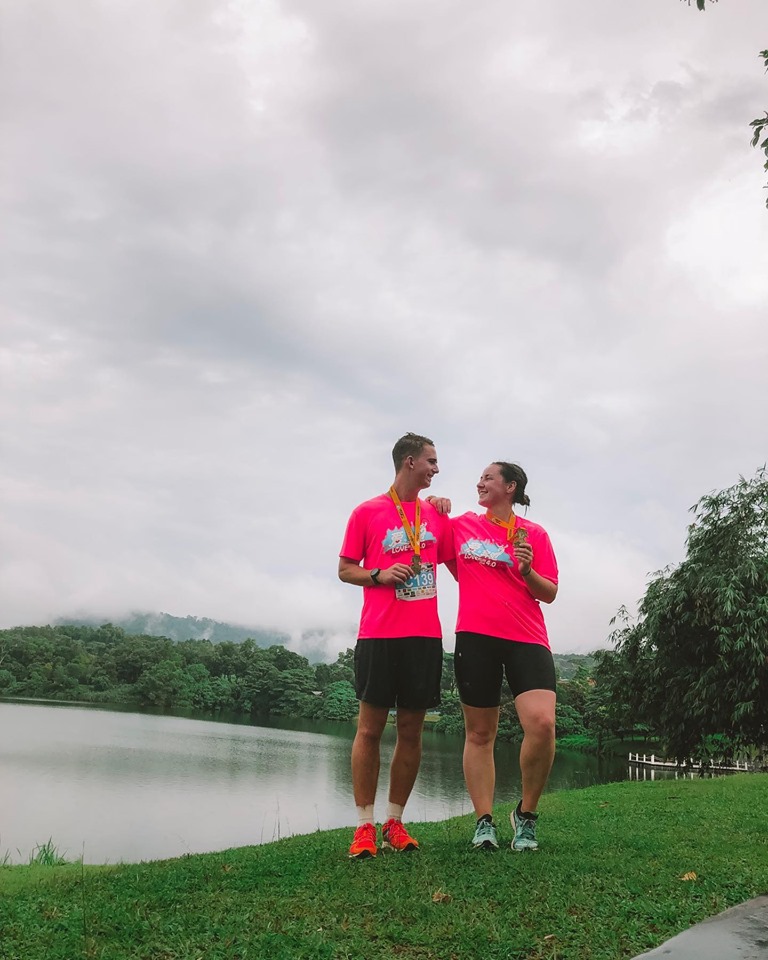 Only two crazy people would do a last minute race and run it in the pouring rain.