This Swiss City Marathon is held on the last Sunday of October in the city of Lucerne, Switzerland. This stunning course takes runners around Lake Lucerne, through the old town and finishing in the museum of transport.

The SwissCityMarathon – Lucerne is the Marathon in Switzerland and takes place always on the last Sunday in October. The route leads from the Museum of Transport along Lake Lucerne, around the Horw peninsula, through the football stadium of FC Lucerne, back in the city of Lucerne, through the KKL Lucerne and the old town back to the finish in the Museum of Transport. The next SwissCityMarathon – Lucerne will take place on October 27, 2019. 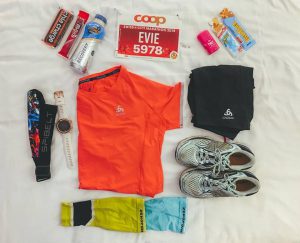 Registration for the event is open online and gives runners plenty of chances to sign up! It is open to international runners, even providing you with your name and nationality on your bib! Prices for 2018 below:

The event prides itself on being open to all runners, stating no classification – no pressure! You don’t have to run for someone else – run for yourself and reach your goals. There was no elite start, just wave times. 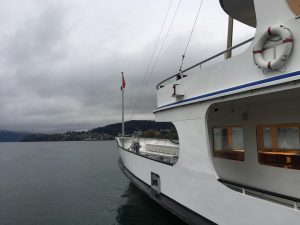 With your entry, you were given free transport throughout Lucerne, including the boat to the start! It’s the first time I have ever done a race where you have to get a boat to the race village. Efficient, once you filled one boat up, there was another waiting to take the rest of the runners. This service was offered for participants and spectators from 6.30am to 5pm.

Now often they say that the spectators really make the race – and I can truly say that this was the case with the SwissCityMarathon. Although a small marathon, they were throughout the route, cheering you on with plenty of “hop hop hop” (hurry up/go). There was signs, music and snacks.

Even on the second loop, they would really be cheering you on. The marching bands throughout the course were still going strong, even with modern songs I recognised, singing along, they all joined in.

Once the 10km started, one thing that I really appreciated, was that the spectators would pick you out of the runners and cheer you on. They would be clapping for the other runners, but as soon as they saw your marathon number (ours were red, 10km I believe were blue) they would suddenly amp up their cheering. They would pick you out the runners personally, call your name or step towards you to cheer you on.

I have never experienced a race with such amazing spectators before – I cannot fault the lovely atmosphere that I experienced on this event.

A 2 looped course, this route aims to let you experience Lucerne city in full. The start leads you along the main strip, luxury hotels and the center of Lucerne. You cross over the main bridge with a view of the famous Kapellbrücke bridge and water tower, you get to experience this 4 times as you come back for the 2 loops.

The route has around 3 hills/slight inclines throughout the route at the 5km, 25km mark. It was better to get the hills done at the beginning of the route rather than the end, but even so – the hills were a little bit of a killer.

Dotted around the routes were fields of cows, noticeable by their cow bells. They came up to the fences to watch you run past, it was lovely to have a bit of nature on the run.

The route takes you around Lake Lucerne and runs past mountain panoramas into the Horw. The town along and run through the modern streets that lead to the football stadium where you are broadcasted on their live screens. You loop back around and head back through the KKL Lucerne (culture and convention center), and then back into picturesque old town of Lucerne before heading for the finish at the Swiss Museum of Transport.

The aid stations are placed every few km’s – water, peak punk, banana slices, orange slices, apple slices, shot blocs, flapjacks – to be honest whatever you could ask for. It wasn’t just one table, it was several tables on both sides of the road, there was never not enough chances to refuel. Several spectators along the route had also made their own aid stations. Runners never felt thirsty or hungry on this race – I certainly didn’t.

A beautiful route which gives you some wonderful Swiss views. 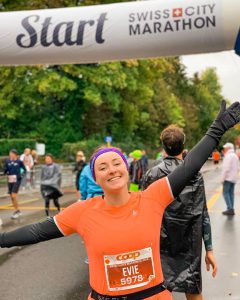 Arriving in Lucerne on the Friday, we were met with glorious sunshine, by the Sunday this wasn’t the case! Walking up to the race start, the clouds had lowered and the temperature had dropped. We wrapped up with extra layers as we headed out into the 2-3 degree weather.

The fast marathon and half marathon runners started gathering around us – I felt out of place! We were told by the race organisers to stay to the right-hand side so that all the faster runners can go past.

The start gun went off and the group shot off – very quickly all the runners disappeared and I was running by myself through the city. I was by myself for a few minutes before I heard the rumbling of steps coming up behind me – I looked around and it was the next wave of runners quickly approaching. I stuck to the side as they all came sprinting past and then left me alone to run by myself. This happened for the next 3 waves before it started to even out again and I was with a steady flow of runners.

I got to the half way point, which seemed to take such a long time! All of the faster runners going in the other direction and the half marathoners overtaking you, I was just ready to find that turning point. I ran past Andy (who was on the other, faster side) and we high fived, he had already passed the half way point. The turning was in site and I glanced at my watch – I was going way too fast and actually had a new half marathon PB. My pacing was consistent but I wasn’t sure if I could continue it for the next 13.1 miles!

I took this opportunity to slow down a little bit, I actually decided to stop for a toilet! My first marathon, I never went but I actually felt like I needed to here. The toilets were done by gender, so I kept running until I found one that had the female symbol on the outside – this was no issue, it was quite nice to have.

From this point I decided to run/walk – I just knew for my sanity, recovery and time, I wanted to run walk. Setting it at 13 minutes run and 4 minutes’ walk – something I am not ashamed of and I think it is a great technique for the steadier runners to follow. At the 19-mile mark, I was starting to get cold, the rain/hail that had come down earlier was starting to cool my body temp and so I needed to get the next bit of the race done as quick as I could or try to run longer to keep myself warm.

For a few stretches of the run, I was by myself. It wasn’t a big event and so when there were long stretches, the amount of runners dwidled. At one stage, the 4:30 pacer came past by himself and juggling! He was part of a circus group and ran the whole marathon juggling, this was very impressive but considering that no one was running with him as a pacer, people couldn’t appreciate it as much.

At 20 miles, we met the start of the 10k race in Horw. I felt a little bit overwhelmed by this point, the race hadn’t started and the marathon route went past the bit where they were lining up to start. They all suddenly started cheering for the marathon runners, there were 3 of us running through at this moment and it was just lovely/overwhelming when they were all cheering you on. It was so encouraging that even though they were about to do their race, they were cheering you on.

We followed the route out of Horw and heard the starting gun for the 10km. Within a few minutes, they came zooming past. We got told to stay on the right-hand side, but then the corners came and the runners were taking the shorter route and also running on the right hand side. It was getting confusing, we came up to a feed station and I got told no when I went to go across because the faster 10km runners got priority. It was getting to the end table and I really wanted some water, so I just ran across the path (sorry 10km runners!) because I deserved water/energy just as much as they did 2 miles into their race, 22 miles into mine.

Coming into the final few miles – I was pretty ready to finish the race. I felt strong but my hip was done. I tried to run as much as possible in the last 2 miles but we headed over the bridge coming back into the old town and the cobbled streets slowed me down. I walked for a little bit until I heard Sara cheering me on, slowly, I picked my legs up for the final stretch. It was a long stretch, it just kept going and going, I spent a lot questioning when the end was going to be. I looked at my watch and I had reached marathon distance and also had a new PB!

I still had another mile to go even though I had reached 26.2 – we figured this happened because I was taking the longest route to mind out of the way of the faster runners. I started to walk again, I knew I had reached my distance and I wasn’t going to push it for another mile!

The finish line was in sight, well the transportation museum was in sight, as we ran into the final few meters. The crowds were still there and I finally got my finish over the line! The runners were greeted by the volunteers and we received our medals, buff and later picked up our finishers t-shirts and beers.

Once we had finished, the racers village was packed. Runners, spectators and volunteers, all congratulating and ecstatic from their runs. We finally all found each other and celebrated our races – everyone had PB’d and had good runs. 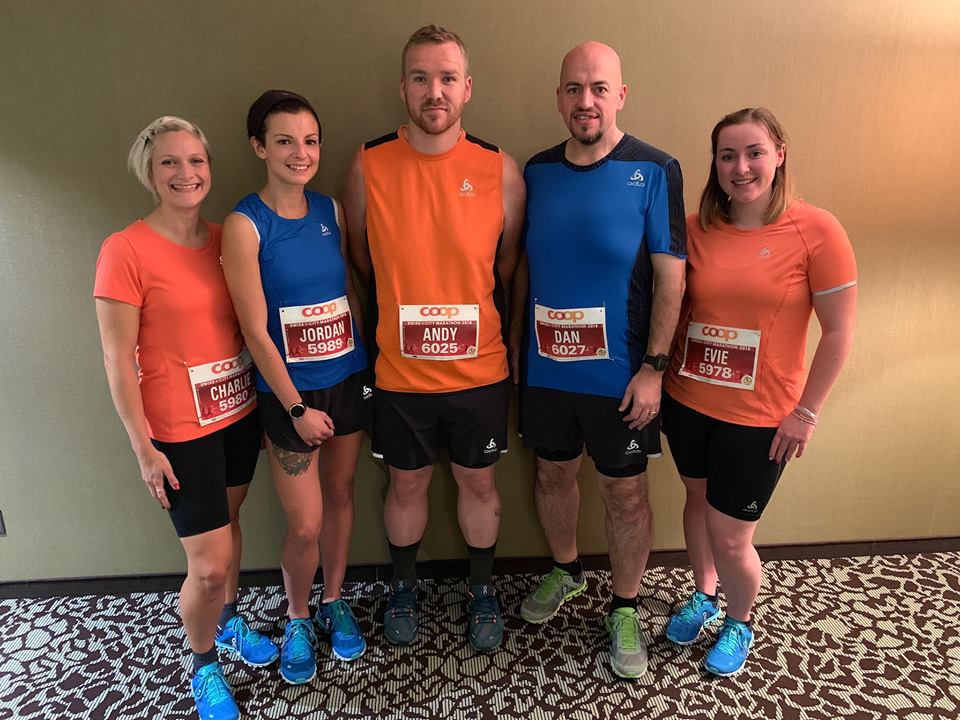 I had a great run; an amazing experience and it far exceeded my expectations of a marathon. The aid stations feeling like they were at every 2 miles, the spectators throughout the whole route and just the general organisation could not be complained about.

The event was so efficient & I felt strong throughout the race. It’s a great way to see a new city, do a race abroad and get a new PB.

Would I do it again? Maybe not, I would visit the city again but 2 loops of the same route is a little bit of a killer for me, so knowing what I would be expecting, I wouldn’t run the marathon distance again. I would however, recommend to anyone to run it for the first time, for a beginner’s marathon or to experience Switzerland. 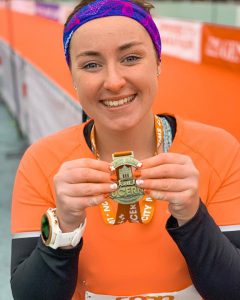 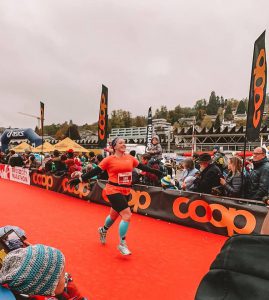 Looking at running our first marathon or want to run the SwissCityMarathon? Check out the website here!