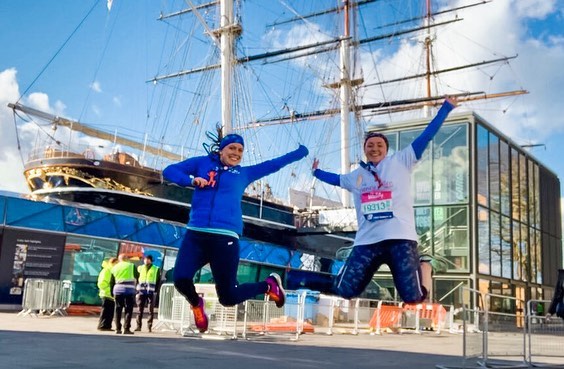 There is also the Vitality Big Festival, in Greenwich park where you enjoy some of London’s best food, music, and entertainment. Unfortunately some of this was not up and running on the day due to the weather/winds and I didn’t get to experience it as we left pretty soon after we finished the race.

The Vitality Big Half advocates for a community running festival for everyone, no matter your age, background or running ability. This is an  event that supports and encourages first-time runners to take part.

I was very fortunate to get a place running this race 3 days before the event via a local charity – The Henry Allen Trust. It is always so lovely to support a good cause and represent the cause.

The Vitality Big Half route for 2019 starts by Tower Bridge, following the Highway and through 1.1 miles of the warm Limehouse Link Tunnel. It follows round through the windy Canary Wharf. The run takes you across the iconic Tower Bridge before heading through Southwark and into Greenwich, where Cutty Sark watched over the runners.

A flat route, this run takes you through parts of London you wouldn’t usually get to experience, as well as iconic sites along the way. 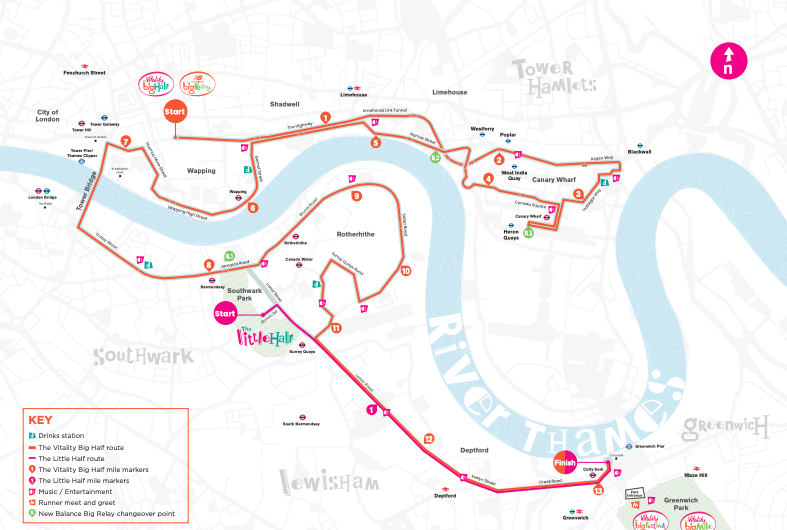 The weather leading up to the event had been terrible if I am honest. It was wet and windy in the week and on the morning – it felt like it was going to be pretty similar.

We came out of the train station and the heavens opened, enough to make us run under the underpass next to the Tower of London. Just to make sure we could get some cover and sort out all of our kit before the bag drop. Luckily after a few minutes, the rain stopped and the sun came out.

The bag drop was a little bit hectic – you had to drop off your kit before 8:25 when the race didn’t start until 9:30. The earliest train from where we lived only gave us 5 minutes to get to the bag drop and someone who had been in the previous year said that they were definitely policing the times. So we didn’t pack a lot in case we just had to bin our bags and run. It was chaotic, there were people everywhere and you almost had to elbow people to get to the front of the line. There was then only one lady taking the bags, so it was a waiting game to see whether she picked you. They then just threw the bags on the pile in the truck, so make sure you don’t pack any valuables.

We then headed to our wave, had a quick loo stop and then waited for the race to start. The toilets were directly next to the start of our wave, so it got very busy closer to our start. The wind was picking up and we waited around for half an hour before our wave started moving forwards. 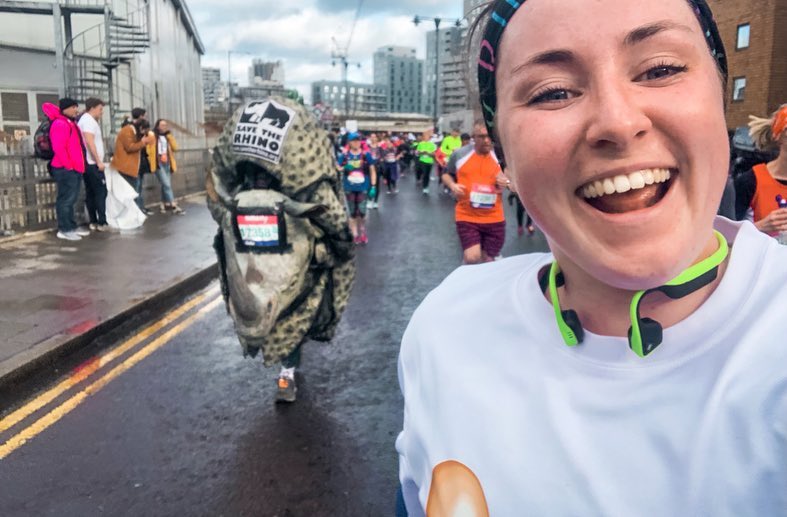 Slowly but surely we set off over the start line and started running. There was a great atmosphere for the first mile, with lots of spectators on the sides of the road and the faster runners running opposite you. We continued running and then came upon the tunnel, it was a long 1 mile that got very hot down there. It went quiet when you got into the tunnel, it was quite a funny experience, every now and then there was a fan noise, but it was hot and quiet. It was interesting to run in, not the most scenic but interesting. 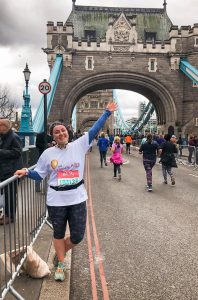 My favourite part of the run – Tower Bridge

We made our way through to Canary Wharf where the wind really decided to pick up. At one stage my legs got taken out from beneath me and I almost fell over. One of my legs kept getting pushed into the other leg the winds were so strong. In a few places, the poor runners in fancy dress had to take refuge and be helped by other runners because the wind was just pushing them over. This was where our watches also decided to go a bit funny – I only found this out after I finished and spoke to other runners/looked at my strava. The data went crazy, and skipped and added about 1 mile onto our route, so when we were running, it seemed like we all had ran an extra mile according to our watches.

My favourite part of the race – Tower Bridge. Over the past year or so, my interest and love for London has grown and I find that the iconic Tower Bridge really stands out as somewhere you have to run over. We actually stopped just before to take pictures before we ran over. The atmosphere was just amazing, loads of spectators were on the bridge, there were marshals cheering us on and there was just such a happy atmosphere as we ran over the bridge. A group of us finished running over the bridge and carried on running, we were definitely all a lot happier after we had experienced the bridge.

Towards the end of the run, our watches all had different times/distances registered – so for us, we had run an extra mile than the mile markers (obviously not correct but at the time we thought it was). I thought I was coming up to meeting my PB for time, but at the pace I was 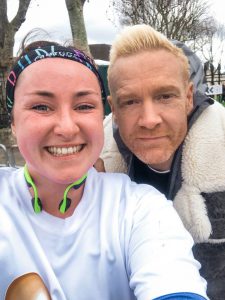 going with, with the group I was running with, I wasn’t going to make it. So for the last 3 miles, I went off, I don’t think I have ever run 5km so fast! I was desperately trying to match my previous half marathon time. As I came up to what I thought was the 13.1 miles, I matched my time and slowed down as I was so out of breath. This wasn’t right but it at the moment it felt great.

We came around the corner and up to the finish line, with one last sprint, I came over and finished next to Cutty Sark. The medals were really great, the shape is different to most medals, and I really loved to have something different than a normal round medal. I took some pictures and happened to walk around the corner just as Iwan Thomas had finished interviewing on tv. A quick snap, a thank you and smile later, it was a great finish to my race.

I met up with the others that I had run with, said our congrats and headed on our separate ways. I was very fortunate to have been involved and run with such lovely people running for an awesome cause. 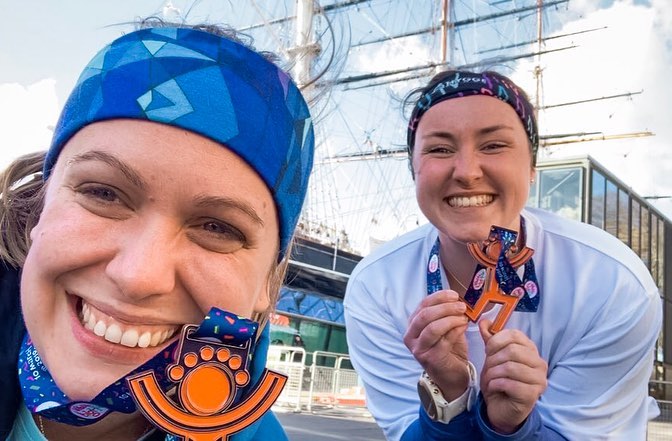 I had a great time, I had lots of laughs, enjoyed the route and genuinely just had a good run. The support throughout the event was lovely, everything was well organised (minus the baggage drop off) and even with the wind, it just all seemed to work out.

I am a little disappointed with the canary wharf section, it messed up my strava achievements. It said I achieved 8 new personal bests, but because of that section messing with my watch, they’re not true. It is such a shame this happened, I know I wasn’t the only one this happened to, now my stats are all different. If anyone reads this and knows how not to accept stats on strava, without deleting the run, let me know!!

I would love to do the Vitality Big Half again, maybe at a time where I can fully run and aim for a PB, but the way we did it this time – was definitely the best way to do it.

So no matter what your pace, your size, your level – this would be a good event to do for your first half marathon. 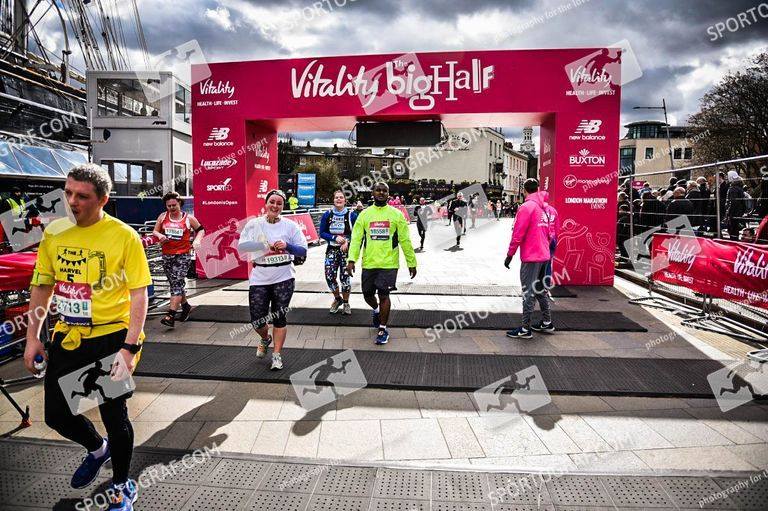 All smiles at the end of the run

Check out the Vitality Big Half here