Looking to run the Winchester Half Marathon? Here is 2018’s race review.

Exploring the town & outskirts of Winchester, this scenic/hilly route gives you the best way to see the city. The run started at 10am on the 23rd September 2018 (2019 date – 22nd September).

If you were running this as your first half marathon, I don’t know whether the route would have put you off. Don’t get me wrong, it is a very scenic route & lovely, but boy, is it hilly!

I certainly found the route hilly, with the first hill being in the first mile!!

The flat parts of the route takes the runners into the heart of the Winchester countryside, and were definitely very scenic. Passing several large houses, vast expanses of fields & good views. Mainly based on ‘clear’ roads, there were a few cars driving past you on the run. Other than that, it was all mainly clear before you headed into town.

Miles 11-12 take route on the Itchin Navigation towpath, which was very peaceful. You followed the canal on your left side, the birds were out, the sun had started to shine through and the marshals were cheering you on. I really enjoyed this part of the route, it was a good way to get that last bit of greenery in before you headed into town.

The route finishes by weaving in and out of town. You run past the cobbled buildings, the cathedral, through the arch and into the finish next to the Guildhall.

Yes, the hills weren’t very fun for the race. I just slowed down and walked up them, instead of hating the incline, you should just take a step back and enjoy it. WALKING IS FINE, YOU ARE ALLOWED TO WALK, ESPECIALLY UP THE HILLS. The rest of the route is actually really good, and you can hit target minute miles running downhill and on the flat parts. 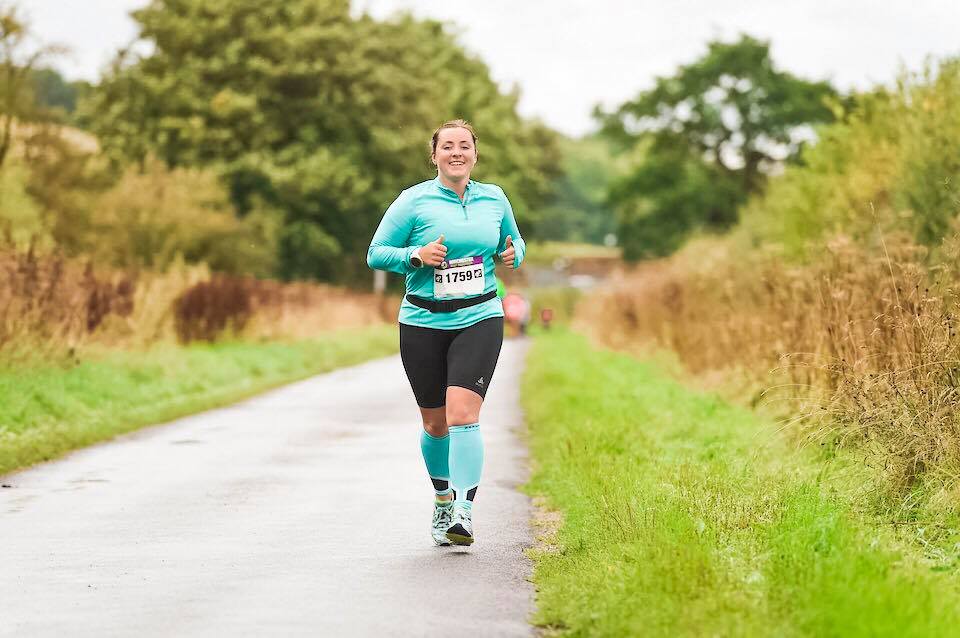 We decided that we were going to run a few miles to warm up before the race – in the pouring rain. The rain did not look like it was going to stop & the weather app said it was going to be at 100% until 11/12.

We ran our warm up in our bin bags & tried to avoid the puddles but it was too late – everything was soaked. Heading in to pick up our run packs and had to shake off all of the water droplets, we tried to dry off just a little.

The call for the race started and the rain subsided. The klaxon went and we set off for the run, still with a few raindrops falling on us. The bin bags were thrown in the bins & the pacers ran into their places.

The first few miles were obviously met by the hills as stated in the route section. There were a few spectators cheering you up the first set of hills. The route followed the straight roads, I often ran by myself as the run was on long straight bits of the road, every now and then people caught up & we had a chat, but I felt like I ran most of the race by myself.

One thing I must say I was impressed by – all of the marshals. I could not fault any of them, they were all so encouraging and happy – even with the conditions. Some were placed at very remote parts, but they all had smiles – shout out to the guy with the maracas!

We came into the finishing mile through town & the spectators were cheering you on. I came underneath the arch and thought that there was still a few hundreds meters to go, turns out the finish was just past this. I felt pretty strong a the finish as I ran over the timing mats.

The only thing I would say with the finish – is that if you were new to running, it wasn’t entirely clear what the finish was. There was no inflatable arch or anyone stood right at the finish. It was just two mats on the floor, I stopped as I came over them, but 2 other runners who finished at the same time as me kept running until a marshal told them that they were finished. I think it should have just been made a little more clear where the finish was. 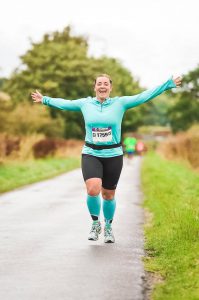 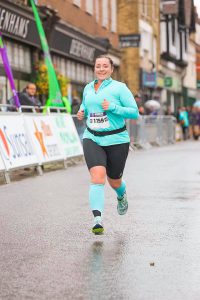 We collected our medals, goody bag, t-shirt, water & bananas in the Guildhall.

I was pretty happy with how I ran, I used this event as a training run & got 18 miles completed this day. The event was well run, it was a good route if you are used to hills. It is worth a race at least once, I’m not not I will do this event/route again – but can recommend to anyone else wanting to run this event. 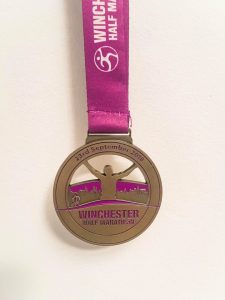